UFC® has partnered with Crypto.com to release a third NFT collection, featuring fighters from one of the organization’s most highly anticipated events: UFC 270. Taking place at the Honda Center in Anaheim, CA on January 22 2022, it is headlined by two championship bouts: current champion Francis Ngannou vs. interim champion Ciryl Gane for the Heavyweight Championship title and current champion Brandon Moreno vs. former champion Deiveson Figueiredo for the Flyweight Championship title.

There will be 2 drops for UFC 270. The first drop includes 3,000 NFTs that vary in rarity, featuring limited edition shards, posters and a belt plate based on UFC 270. Users who collect certain “UFC 270” NFTs before 23 January 2022, 13:00 UTC—either during the drop or in the Marketplace—will be automatically entered into the UFC 270 Collection Sweepstakes, where they can win exclusive UFC prizes.

The second drop will feature exclusive UFC belt NFTs customized with UFC 270 champions’ belt plates, where these belts can then be added to the user’s UFC Collection Book. The UFC belt NFTs will be dropped after the UFC 270 event ends and champions have been crowned.

Don’t miss your chance to own a digital keepsake of your favourite fighter and a piece of UFC history. 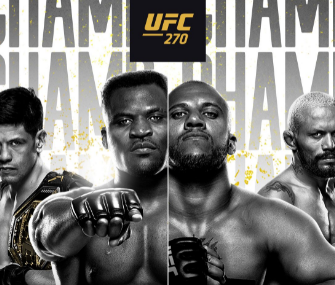