THE HEROINES OF FRAZETTA

This collection highlights the unique ways Frank Frazetta painted women. His work transcended the pinup girl archetypes of Alberto Vargas and Gil Elvgren. Frazetta opted to depict women as strong, powerful, and beautiful heroes in their own mysterious ways that went beyond the superficial prettiness. As Frank Frazetta once said:

“I don't want to paint just another woman. A painting, it's something important; you want to look at it, maybe forever. Who wants to look at just an ordinary hero forever? You want the ultimate, you pull out the stops and do everything in extremes. The extreme in beauty, if it fits; the extreme in ugliness if it fits; the extreme in terror if this is what's required. You know, I think this is one reason that so many people enjoy my stuff, because all of these extremes are jammed into it.”

Cat Girl, which is the most iconic of the series, features a woman that stands confident and nude in a jungle surrounded by wild leopards. The posture of the voluptuous figure, highlighted in the intimate lighting, creates a sense of poise, confidence and elegance. Meanwhile, Beauty and the Beast depicts a muscular woman confronting and attacking a monster head-on. Again, emphasizing the strength of the women in his work, which perhaps serves as a reminder of how Frazetta viewed the women in his life. Finally, Dawn Attack, in contrast to the others in the collection, is based in a futuristic setting. It was used on the cover of L. Ron Hubbard’s paperback Writers of the Future Volume 7. The female protagonist, juxtaposed with the robotic warriors, is shown as the leader standing strong despite the enemy attack.

The three works for this collection: Cat Girl, Beauty and the Beast, and Dawn Attack, each exemplify the versatility of women that have become famous throughout Frazetta’s works. 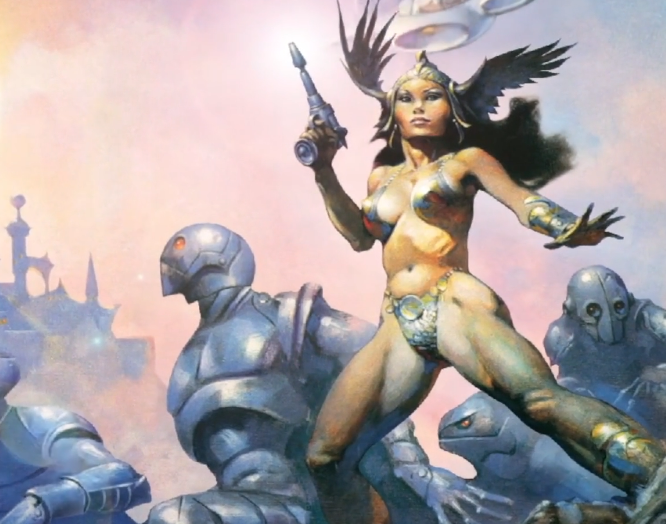