The Holoverse and MakersPlace are thrilled to present Vincent van Gogh's Sunflowers, one of only two Hologram NFTs (or "HNFTs") in existence, and the only one currently available for purchase.

Sunflowers was created using a proprietary process developed by The Holoverse to generate a high-resolution, 360-degree visual rendering of Van Gogh's original painting, which was then minted as an NFT.

The rendering was installed on a 4K volumetric hologram device — custom designed, manufactured, and assembled by The Holoverse — to represent the masterpiece in physical form. While the hologram itself is a true 1:1 scale of the original artwork, the HNFT device measures nearly 7' tall by 3' wide when installed with its included pedestal, and will be shipped, delivered, and activated with white-glove service, free of charge.

A half-billion-pixel image of the original canvas, also included in the sale, lets the viewer zoom in to experience the work in more detail than the naked eye can see on any device capable of displaying .TIFF filetypes. Sunflowers has hung in the Vincent van Gogh Museum in Amsterdam since 1994 and is unlikely to be available for purchase in our lifetime.

Van Gogh’s paintings of Sunflowers are among his most famous. He painted a total of eleven of these canvases, although the most commonly referred to are the seven he painted while in Arles in 1888– 1889. The other five he had painted previously while in Paris in 1887.

Many elements repeat in this series, and often only minor differences separate them and the composition typically carries over from painting to painting.

The Sunflowers are a signature that Van Gogh made his own. Indeed, no Van Gogh retrospective since 1901 has voluntarily neglected to include at least one Sunflower painting.

Van Gogh never articulated the root of his sunflower passion, but in a letter to his sister talking about his friend Gauguin coming to stay in his yellow house in Arles, Van Gogh stated his intention to decorate the whole studio with nothing but sunflowers. In another letter to his brother Theo, Van Gogh valiantly declared, “the sunflower is mine.”

‍He hung the two above-mentioned “studies” in the room Gauguin took in the Yellow House. Gauguin was impressed and thought the pieces were “completely Vincent.” Gauguin even helped to cement this legacy in his Arles painting, “The Painter of Sunflowers.” 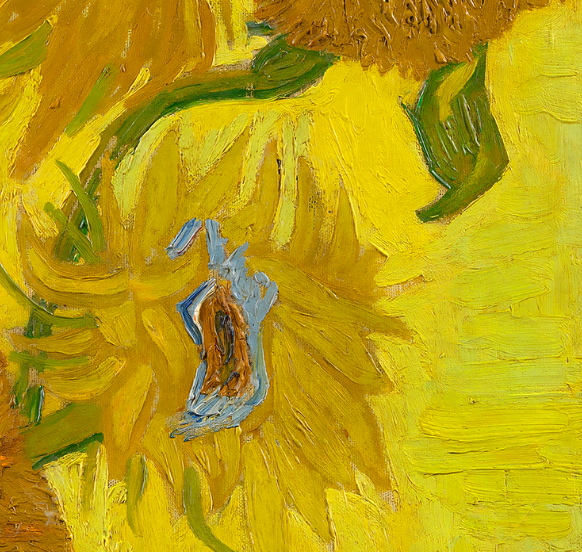