The year is 2563, the Earth was plagued by a man-made crisis: the economies collapsed, states ceased to exist, and all livable territories have been divided up between warring clans. They built killer slaves, soldiers with no feelings, no free will, only one goal - to terminate the enemy. These machines, controlled by synthetic intelligence, won't stop at anything to finish their quest. 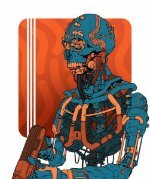