November 4, 2008: CNN projects that Barack Obama has won the 2008 presidential election to become the 44th president, and the first African American president of the United States, Wolf Blitzer announces.

The decisive victory was a watershed moment in US politics as Obama rose to the nation’s highest office on a campaign of hope and change. The increased turnout, especially among Black voters in the South, helped to flip nine states and earn the largest popular vote percentage by a Democrat in 44 years. The preceding Democratic primary also helped shape the party’s landscape for years to come, with Obama defeating Hillary Clinton — the eventual first woman nominated by a major party in 2016 — and Joe Biden, who Obama selected as his running mate and who would go on to become president in 2020.

This special edition NFT comes with a physical frame by Infinite Objects that we will ship to you to display the CNN Moment along with the race to 270 election results map and presidential trivia. This unique commemorative item remains yours as the original buyer even if you sell the NFT. The custom frame also includes special edition details on the back with a QR code to your individually-numbered CNN Moment. 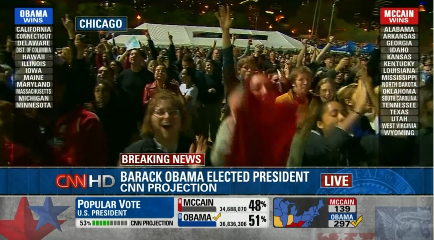