Global superstar, Oliver Heldens isn’t just one of the most in demand DJs, headlining festivals like Tomorrowland, Coachella, Ultra, EDC, and more, he is also one of the most sought-after producers in the game. Releasing collaborations with A-list artists like Nile Rodgers & Becky Hill, stand out official remixes for the likes of Calvin Harris, Dua Lipa, Glass Animals, Justin Timberlake, Katy Perry, and topping the charts with every release, Oliver Heldens is without a doubt one of the most sought after names in the game!

Having spent the past year learning about Web3 and the crypto space, not only is Heldens getting ready to release a plethora of new singles in 2022, he will also be dropping an exciting new NFT collection—“Oli Pods”. The first installment of the Oli Pods, The Genesis Collection, consists of 4 Oli Pods each centered around an animated 3D Oliver Heldens dancing, shuffling, and posing to original beats he produced for the different pods. As someone who has been experimenting with the NFT space for some time, Oliver is excited to usher his fans into Web3 by providing low cost NFTs packed with an abundance of exciting utility.

The first Oli Pod NFT - Oli Gecko - is set to release on Thursday, June 9th just ahead of Oliver’s new single with Tchami and Anabel Englund, “LOW”, on June 10th. The next 3 Oli Pods - Oli Koala, Oli Darko and Oli Hasta La Banana - will be released on Thursday, June 16th and will include a host of exciting perks and utilities.

Oli Gecko and Oli Koala are named after two of Oliver’s biggest songs, with “Gecko” being the song that catapulted his breakthrough to international stardom. Oli Darko is a nod to one of Oliver’s newest song creations to be released in 2023 and Oli Hasta La Banana depicts Oliver in a terminator-style animation against his signature sound. 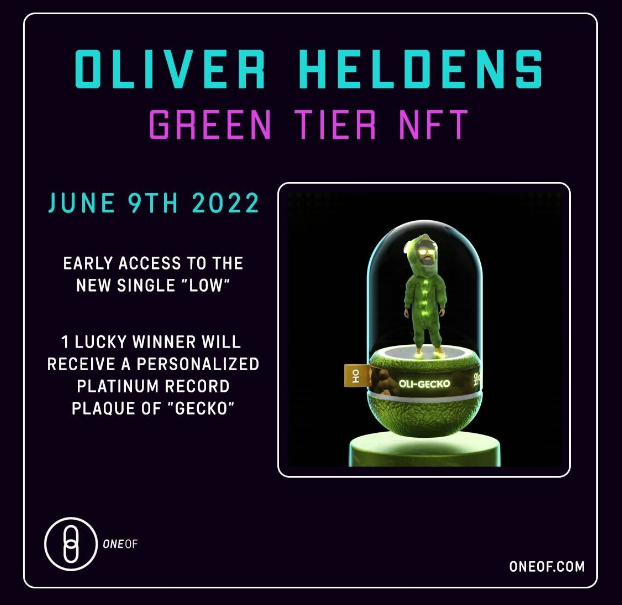