March 24, 2018 - Hundreds of thousands across more than 800 cities in the United States march in what is the largest student-led protest since the Vietnam era. Students who survived the February 14th mass shooting at Marjory Stoneman Douglas High School organized the advocacy group Never Again MSD, and planned the historic march against gun violence.

Students rallied in the name of change, calling on Congress to make comprehensive modifications to gun control legislation. The group specifically emphasized the need to ban assault weapon sales, improve universal background checks and raise the age of gun ownership to 21.

The nation-wide marches were organized in just six weeks. Momentum grew as word spread that students would lead a protest in Washington, D.C. and speak to the marchers on Capitol Hill. Their rallying cry inspired celebrities and corporations alike to donate to the campaign, many of whom attended, spoke and performed to promote this act of civic engagement.

Their advocacy did not fall on deaf ears.

The March for Our Lives protest marked a major turning point in America's stance on guns. Substantial legislative changes were made as 67 gun safety bills were signed into law across 27 states. After the march, the Department of Justice amended gun regulations by banning the possession of bump stocks.

The momentum behind the movement led to an increase in youth voter turnout, bringing 10% more voters between the ages of 18-29 to polls on Election Day. 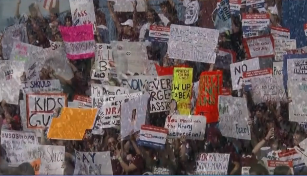