June 16th, 2022 marked the 55th anniversary of Monterey Pop Festival—celebrated for the first major appearances of Jimi Hendrix, the Who and Ravi Shankar; the first large-scale performance of Janis Joplin; and the introduction of Otis Redding to a mass American audience. The 1967 festival is regarded as the birth of the “Summer of Love” movement; the Hippie, Flower Power and Flower Children eras; as well as setting up the template for Woodstock and Altamont and every major rock music festival after that.

Jill Gibson was there to photograph it all over a three-day period and photographed nearly every act. Her shots of Jimi Hendrix, Janis Joplin, Brian Jones, and others have been published worldwide. Perhaps most famously, Jill’s iconic image of Jimi Hendrix graced the front cover of the Rolling Stone Magazine in 2003. And now, for the first time ever, Jill is publishing a series of THREE limited-edition photographs (of 100 editions each) from the festival—including her famous cover shot of Hendrix. Each print is numbered and signed by Jill and comes with a secure Digital Certificate of Authenticity created by Chris Vranian, America’s foremost Rock and Roll Photography curator. In tech terms, this NFCOA (Non-Fungible Certificate of Authenticity) confirms your ownership of your limited-edition signed Jill Gibson print on the blockchain. 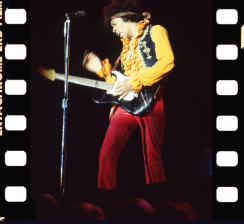