n our ever-expanding metaverse, OneOf is thrilled to partner with Globe Entertainment and Media—custodians of the world’s most famous archives including Globe Photo Agency, Movie Star News and the Frank Worth Archive. Globe’s extensive library houses over 20 million images offering the very best of celebrity and historic images of the world’s most famous movie stars, bands, musicians, artists, sports, movie stills, and historical events.

These breathtaking shots of Hollywood-darling Marilyn Monroe were taken by iconic photographer Frank Worth— friend and confidant to many of Hollywood's elite. His personal relationships and loyalty to the stars he candidly shot kept him from publishing his images, and as a result, only a few of his extraordinary photographs were seen during his lifetime. Worth made a modest living as a freelance photographer in Hollywood during the 1940s and 50s, when most photographers were constrained by the powerful studio system. However, Worth used his personal relationships to sidestep these restrictions, permitting him to capture the greatest collection of intimate images and the glamor of the icons and the era—including one of the most legendary actresses of all time—Marylin Monroe.

Three lucky buyers selected only from the OnePass or Globe NFT holder pre-sales will be given the opportunity to upgrade their print size as well as receive a 1-Year video streaming service subscription!

The Redemption Token NFT serves as a trading token for the physical prints of Marylin Monroe and its accompanying non-fungible certificate of authenticity (NFCOA). Buyers will be able to choose ONE print from THREE Marilyn Monroe photographs taken by Frank Worth. This redemption token can be used to resell this NFT on the OneOf Marketplace. Once the holder of the Redemption Token NFT decides to redeem their token for one of the three physical prints of Marylin Monroe, their token will be burned and replaced with the NFCOA, confirming their ownership of the physical print, and the print will be sent to their mailing address.

2️⃣ Marilyn Monroe on Set of The Seven Year Itch, 1955 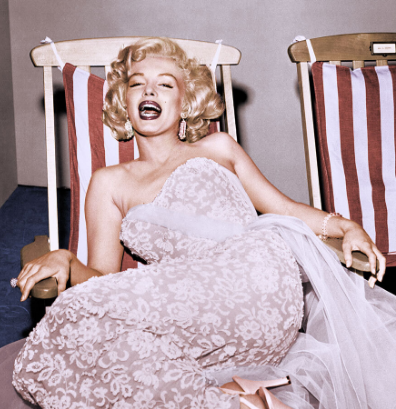