One look at G-Eazy and it’s clear—he’s not your average rapper. You'd be forgiven to assume the native Californian was the frontman of an indie rock band… until, that is, you hear his quintessential rap lyrics and it becomes glaringly obvious —he’s 100% hip-hop.

It’s the incongruous yet admirable blend of James Dean-esque looks and the flow of Drake that has catapulted G-Eazy to hip-hop stardom. Although blessed with enviable hair and cheekbones, it’s really his retro-monochromatic style that’s captured the attention of hip-hop fans and earned him spots on the GQ and Vanity Fair best-dressed lists.

It’s that fluent mix of timeless pieces and the most hyped streetwear that defines G-Eazy’s style, THAT style. Think YSL leather and varsity jackets matched with skinny jeans and, of course, the hottest Jordans, Yeezys or Nikes.

But it’s not just fashion that G-Eazy likes to take the lead on. In 2017, G-Eazy led his fans into the crypto space by joining “Project Coral Reef”—an initiative that enabled them to purchase music and merch with cryptocurrency, Monero.

Now in 2022, G-Eazy steps effortlessly in the NFT space with a collection that, of course, celebrates his iconic style and is so aptly named: “The Geralds”. A collaboration with digital art breakthrough, Azerbaijan-born Dzanar, each Gerald NFT depicts a unique trait of G-Eazy with its own characteristics and styles. The Geralds will be sold in packs with opportunities to collect different combinations for chances to win once-in-a-life-time perks such as VIP tickets to a G-Eazy concert, partying with G-Eazy in Las Vegas, dinner with G-Eazy & his friends in LA, and much more!

“I’ve been interested in fashion and style since I was a little kid and, though my first world is music, the two are very connected—I see it as another way of expressing myself.” — G-Eazy. 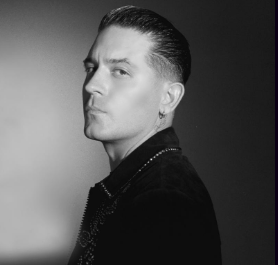