Dogecoin is on its way to one dollar! Now DogeX has arrived to conquer the NFT space for Dogecoin. DogeX brings the Doge legend to life in the form of ten thousand collectible characters on a mission to mars. For the first time, an NFT series will showcase five sets of characters, each progressively rarer than the last: Earth Doges, Moon Doges, Journey Doges, Mars Doges, and Asteroid Doges. Did we forget to mention an additional rarer than rare ten including Elon Doge, Doge Cuban, and Billy Doge? 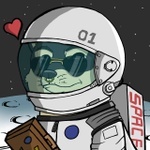