Many centuries ago humanity has begun a program for the exploration of new planets. As the first experiments various animals such as monkeys, cats and rabbits were sent into the space. Some expeditions ended in success, some turned into a disastrous result. For the next flight to one of the most distant planets, a group of 10 Shiba Inu dogs was chosen which were distinguished by a special mind and good physical training. High hopes were put on this expedition, funding came from 23 leading countries. However on the 570th day of the flight a failure happened in the broadcasting system and communication with the space ship was lost forever. 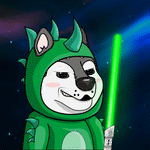