The Era of BattleKatz began with the Fall of Planet Fellos

Planet Fellos was home to a civilization of Felines, however, these cats were not the typical house cat you and I know.

These Felines known as Katz were able to build entire civilizations, paws and all; with immense strength and intelligence, Katz were a true success on their planet. However, nothing good lasts forever, planet Fellos had its issues. Katz that wanted to seize power for themselves began exploiting their technologies and cutting corners to increase their profits and power. 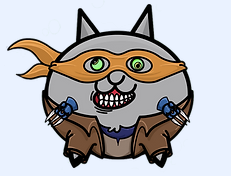