November 6, 1984: in prime time on election night with polls still open in some states and only 10% of the votes counted, CNN reports that it is clear to both the Reagan and Mondale campaigns that Ronald Reagan will win re-election.

The result was a landslide, with Reagan winning the most electoral votes in history. Walter Mondale and his running mate Geraldine Ferraro, the first woman nominated to a major party’s presidential ticket, only narrowly won Mondale’s home state of Minnesota and the District of Columbia. Reagan’s campaign emphasized a strong economy and national security. Many analysts credited the victory to “Republican Democrats” swayed by these issues, which has become something of a blueprint for the Republican party, and a strategic theme that has continued through 2020 and beyond. 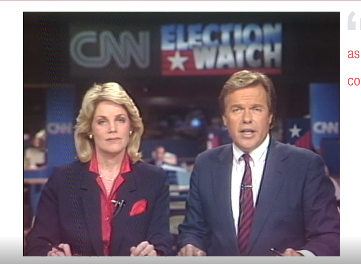